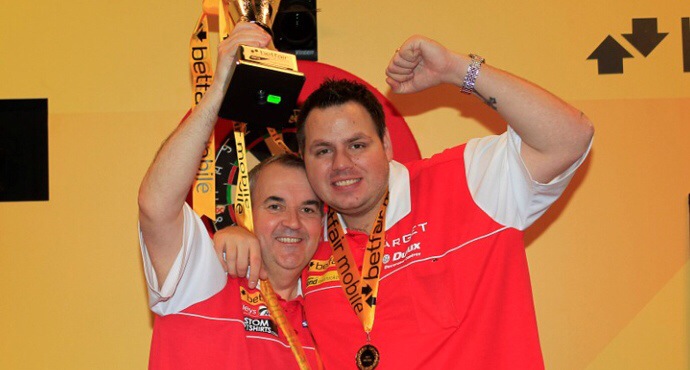 Two-player teams from Norway, France, China, Hong Kong, Singapore, Thailand and India will all make their debut in the PDC tournament alongside the established entrants.

Betway Premier League Darts debutant Peter Wright returns to the World Cup stage for Scotland alongside Robert Thornton, whose recent Players Championship double in Wigan saw him jump back into the top ten and secure a place ahead of Gary Anderson.

Welsh duo Mark Webster and Richie Burnett link up once again, with Brendan Dolan and Michael Mansell continuing their partnership for Northern Ireland and Ireland seeing Connie Finnan and William O’Connor travel to compete in Germany.

Simon Whitlock and Paul Nicholson once again represent Australia – having been the beaten finalists in 2012 – while three-time World Champion John Part is joined by emerging prospect Shaun Narain in the Canadian team.

The growth of top-class darts in Scandinavia is shown with the inclusion of Norway – represented by Robert Wagner and Vegar Elvevoll – alongside last year’s semi-finalists Finland and their rivals Sweden and Denmark.

World Championship star Devon Petersen will be partnered for South Africa by newcomer Graham Filby, who has been a strong performer on the domestic circuit, while Japanese pair Morihiro Hashimoto and Haruki Muramatsu team up once again.

The draw for the bwin World Cup of Darts will see the 16 seeded nations drawn against the other 16 teams for the knockout first round, with the tournament then progressing in a bracket format. The draw will be made on Thursday.

See bwin World Cup star Adrian Lewis at one of the biggest darts events of the year!

Tickets for the titantic tungsten tussles are selling fast and are available now from our online shop.